Several data models have been developed and proposed independently in recent years. These models include FGDC (ITIS, 2000), Nomencurator (Ytow et al., 2001), Pisces-II (Pyle, 2000) and Prometheus (Pullan et al., 2000). All of them support multiple taxonomic views, which demonstrates an increasing recognition of the necessity to provide such a facility in order to assist taxonomic work. Each of these models inherits some of the customs and practices from the background taxa for which the model was developed. This suggests that the models may be lacking in their ability to support multiple taxonomic views of a global-scale federation of databases. Finally, each of the models also contains elements of the potential taxon concept (Berendsohn, 1995 and 1997).

Compared all data structures support multiple taxonomies. Adding that, they have following characteristics: 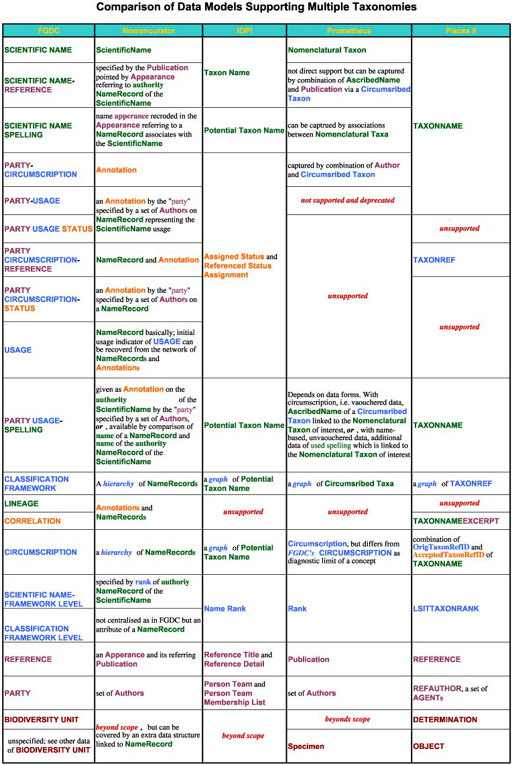 Entity or class name are shown in Helvetica. Attributes of class or entity are shown by bold Times. Metastructures are shown in oblique Times. A colour encodings is also used: green for name related structures, blue for taxonomy, orange for assertion on taxa, brown for instances, purple for publications and authors and red for unsupported. Publications and authors are encoded by the same colour because a publication is a "time-stamped author" (Richard L. Pyle, personal comm.) in essence.

Only differences in terminology?

Taxonomic database is an extension of communication between "users" including taxonomists. It captures a summary of a taxonomic work just like taxonomic works appeared in traditional publications. A communication model amongst taxonomists shows that there is no direct link between the taxon concepts of the author and the reader (user). There are two indirect ways to access to a taxon concept, by name or by instance. Circumscription sensu Prometheus captures access by instance, while Nomencurator captures access by name as potential taxon sensu Berendsohn (1995), or, a usage of the name. 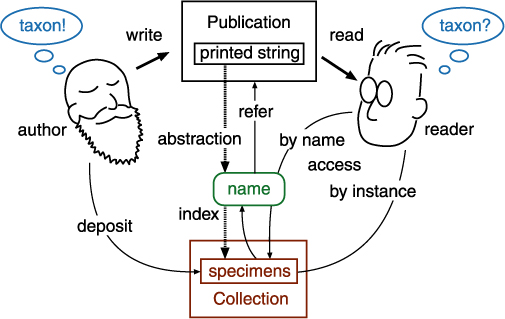 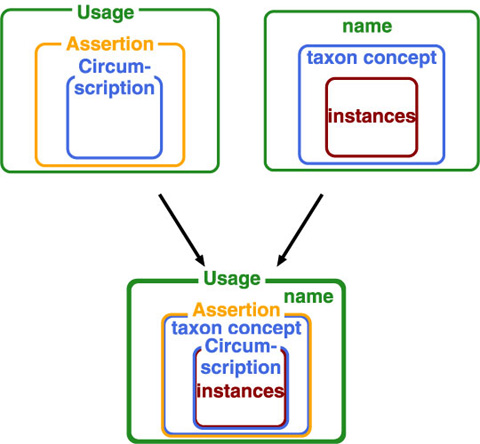 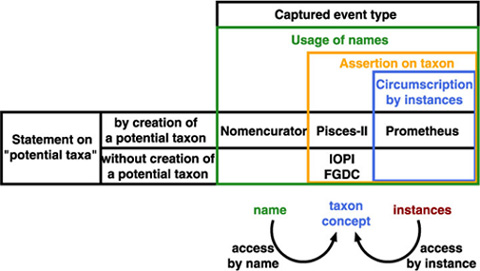 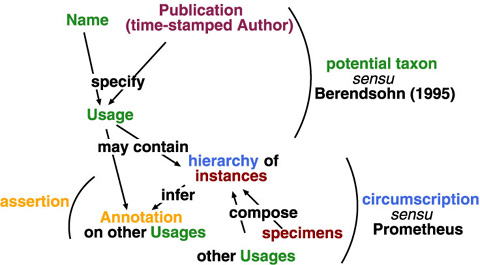 For names of rank higher than species have names as their instances, instead of specimen for species or lower. Therefore, name usage also covers "access by instance" for higher ranks. It can be captured by a database architecture shown below. Six databases are logically distinguished, but unnecessary to be implemented as separated databases. It is also possible to implement them as separate tables in single RDBMS. Detail of physical implementation depends on volume of data, coverage of taxa and performance. Note that taxon concept at each level is encapsulated by name for higher level or by identification at entity level. Database covering taxon information such as description must be covered separately. The entity level is unnecessary to be species or lower; if you intend to examine family based on specimen instead of genus, the entity level must be shifted to family. It implies that this architecture also works under PhyloCode style taxonomic view. 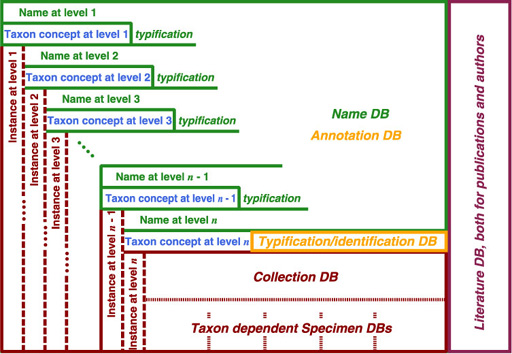 We are grateful to Richard L. Pyle and Mark R. Pullan for detailed explanation of their data structures.